Jim is a certified music arranger and songwriter from Glasgow who came out to visit the Levante area of Almeria in 2006 and has never really the left the place for very long since then. He has had his songs played on BBC TV and radio, and his song “Almeria’s Shores” has been played by radio stations in several corners of the world (mainly obscure). For M & M, Jim has written new arrangements of songs by the likes of the Beatles and Ray Davies. He’s possibly the only musician in the area keeping the spirit of Morecambe & Wise alive by doing a new reggae arrangement of “Bring Me Sunshine” and morphing Grieg’s piano concerto (by Grieg) into Tiger Rag.

Over the years, Geoff has been the lead singer in lots of bands and musical groups, including a prog rock group, a Who tribute band, and a few very good covers bands, including his current rock outfit ‘Stiff Upper Lip’. He has also had a long running and successful solo career, and has played and sung with three acoustic trios, but this is Geoff’s first foray into the world of duos. Originally from Harrow, Geoff is now happily retired in the Almeria province of Spain, with lots of time to devote to musical activities. Geoff sings, plays a little guitar (the guitar is full sized, he just plays it a little) and has written and recorded a number of his own compositions. 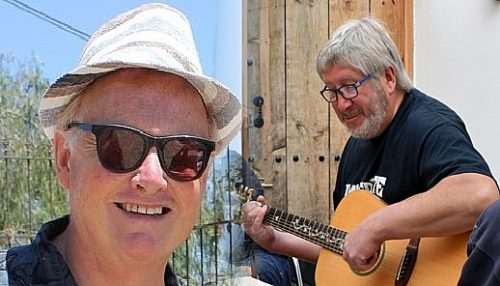